In the wake of the 2016 election, everyone from President Obama to Pope Francis has raised concerns about fake news and the potential impact on both political life and innocent individuals. Some fake news has been widely shared, and so-called “pizzagate” stories led a North Carolina man to bring a gun into a popular Washington, D.C. pizza restaurant under the impression that it was hiding a child prostitution ring.

According to a new survey by Pew Research Center, most Americans suspect that made-up news is having an impact. About two-in-three U.S. adults (64%) say fabricated news stories cause a great deal of confusion about the basic facts of current issues and events. This sense is shared widely across incomes, education levels, partisan affiliations and most other demographic characteristics. These results come from a survey of 1,002 U.S. adults conducted from Dec. 1 to 4, 2016.1

Though they sense these stories are spreading confusion, Americans express a fair amount of confidence in their own ability to detect fake news, with about four-in-ten (39%) feeling very confident that they can recognize news that is fabricated and another 45% feeling somewhat confident. Overall, about a third (32%) of Americans say they often see political news stories online that are made up. While it is difficult to measure the precise extent to which people actually see news that has been completely fabricated – given that news consumers could see but not recognize made-up news stories as well as mistake factual stories for false ones — these figures provide a high-level sense of the public’s perception of this kind of content.

Americans generally confident in their ability to identify fake news

Although Americans see fake news as causing a great deal of confusion in general, most are at least somewhat confident in their own ability to identify when a news story is almost completely made up. About four-in-ten (39%) are very confident, while another 45% are somewhat confident. Only 9% are not very confident, and 6% are not at all confident. (This is similar to Americans’ general faith in their ability to tell when information online is trustworthy.) 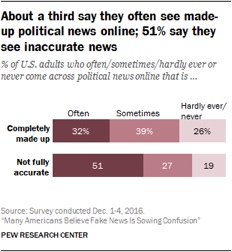 Nearly one-in-three U.S. adults (32%) say they often see fake political news online, while 39% sometimes see such stories and 26% hardly ever or never do. In a rare instance of demographic differences, whites are more likely than blacks and Hispanics to say they often see fake news, and those with annual incomes of at least $75,000 are more likely than those who make less than $75,000 to say so.

To be sure, there are limits to what this self-reported information can capture, as it cannot determine whether these levels of confidence are truly warranted. There could, for example, be more fake news on the internet that goes unnoticed (despite high confidence in one’s ability to detect it) or some news that is erroneously thought to be made up. Further research could help tease out these different possibilities. What’s clear even now, however, is that Americans perceive fake political news stories to be a consistent threat online – but see themselves as fairly adept at detecting when a story is made-up.

Some Americans say they have contributed directly to the distribution of fake news by sharing it themselves. About a quarter (23%) say they have ever shared such stories, while roughly equal portions say they have shared made-up news knowingly and unknowingly.

A similar percentage, 14%, say they have shared fake news they knew was made-up – whether because they want to spread misinformation, to “call out” the stories as fake, for the amusement value, or for some other reason.

Social media, politicians and the public all called upon to help prevent spread of made-up news 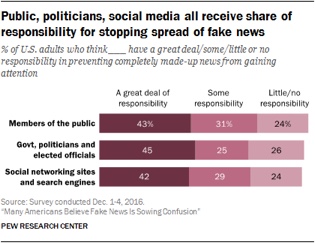 If the spread of fake news is a problem, who bears responsibility for addressing it? In the month since the presidential election, social networking sites and search engines have taken steps to address the issue. And there have been calls for the government and the publicitself to take action as well.

While each of these three groups was seen as responsible by about an equal share of the public, it is not the case that every American thinks each bears a great deal of responsibility. In fact, only 15% of U.S. adults say this of all three groups, while 58% named one (31%) or two (27%) of the three groups.

There are no partisan differences in terms of the responsibility assigned to the two other groups, however.

Those who say they often see made-up political news online are more likely to say each of the three groups has a great deal of responsibility. About half (53%) place a great deal of responsibility on politicians (compared with 41% who see fake political news online less often), on social networking sites and search engines (53% vs. 37%) and on the public (51% vs. 39%).